On 19-20 October, 800 leaders spanning 53 countries convened in Denmark for the P4G Copenhagen Summit: a first-of-its-kind event inspiring, accelerating and recognizing partnerships between governments, businesses, and members of civil society to drive inclusive growth and measurable progress on the Sustainable Development Goals (SDGs). 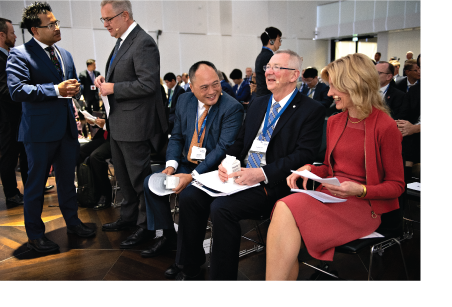 In his opening remarks, Prime Minister Lars Lokke Rasmussen of Denmark commented, “You are here for a reason: to bring hope and practical solutions to a world in need of it… and to show the world what strong partnerships can do, and what an alliance of action can bring.”

Over the next two days, ‘action’ was the driving force behind every session.

“To implement all of the Sustainable Development Goals, it would cost the world about three to five trillion dollars per year to implement,” began Paul Polman, CEO of Unilever, early on Day One. “That sounds like a lot. But if you look at each of the goals, we’re probably spending more by not acting. Climate change is supposed to be costing us 3.5 trillion dollars a year. Keeping women from the same rights as men could be costing 20 trillion dollars a year. The cost of wars and conflict is costing the world 10-12 percent of the global GDP. If we work together to find solutions, there is an enormous payout on any of these goals.”

Later in the afternoon, 24 P4G partnerships and 15 State-of-the-Art partnership finalists split into five sector tracks -- food and agriculture, water, energy, cities and the circular economy – to address the needs and issues specific to their focus areas, and to offer expert advice and support for more successful partnerships. 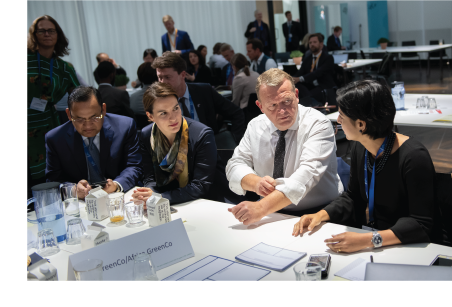 Prime Minister Rasmussen joined P4G scale-up partnership Africa GreenCo in the Energy track to learn about their pursuit to improve energy access and financing in Zambia and other African countries. In the wake of his visit, GreenCo CEO Ana Hajduka and her team remarked, “We are honored to be part of the P4G family. Now the onus is on us to deliver, which we will do.”

Drivers of the Building Efficiency Accelerator, another P4G scale-up partnership, emphasized how much more connected the Summit allowed their partnership to become.

“The Summit created a wealth of opportunity to forge new relationships with a diverse set of stakeholders all invested in helping the world meet the SDGs. With P4G's support we are excited to be able to scale-up our impact on building energy efficiency in cities,” remarked Lisa Bate, WorldGBC Chair.

Deputy CEO Rachel Muthoga of Kenya Private Sector Alliance (KEPSA), which serves as P4G’s national platform partner in Kenya, added, “Our personal benefit is that it gave us so much time to talk about some of the issues we heard here, and thus identify what we are missing back home. It was so helpful to have that chance to quickly come together and create key steps for both how to move forward and how to tackle them together.”

Day Two of the Summit brought together five heads of state on the same stage. President Moon Jae-in of the Republic of Korea, Prime Minister Nguyen Xuan Phuc of Vietnam, former President Mulatu Teshome Wirtu of Ethiopia, Prime Minister Marke Rutte of the Netherlands and Prime Minister Lars Lokke Rasmussen of Denmark together addressed the 800-person crowd with a collective need: we must work together to achieve a more sustainable world. 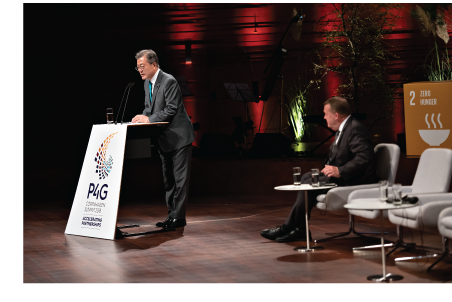 President Moon Jae-in reiterated in his message that transcending borders and sectors is foundational for a better future. “I believe that our power to accomplish sustainable development and respond to the climate change crisis lies in a love for humankind,” he began. “I propose that countries place the spirit of inclusiveness at the center of their relationships for the sake of sustainable growth. Hans Christian Andersen fairy tales, which are loved by people around the world, end with the following sentence: ‘and they lived happily ever after.’ We want such an ending. For sustainable growth and climate change response, the Republic of Korea will always stand with the international community in support of the spirit and implementation of P4G.”

Following the opening session, former Prime Minister of Norway and the “mother of sustainable development” Gro Harlem Brundtland joined two young innovators paving the way for the next generation of green growth advocates. 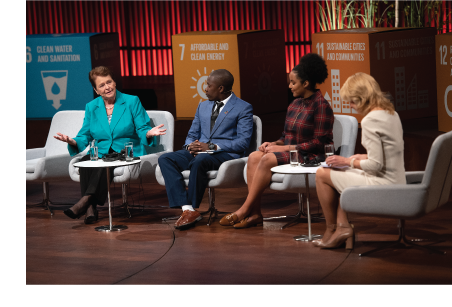 “The Commission delivered our report in 1987. It took 28 years before 2015 where both the SDGs and the Paris Agreement were made. If you think about the drama of the changes in the world, but also the radical change that is necessary, it is fantastic that it did not take more than 28 years,” she reflected. “We have built consensus, but it has taken some decades. This consensus happened in 2015, and now we are on the road to do what is necessary – which is what we are figuring out here.”

The Summit concluded with the recognition of P4G’s scale-up partnership funding recipients and the awarding of the 2018 Partnership of the Year award to the Courtald Commitment 2025, a P4G State-of-the-Art partnership cutting the cost of food and drink to minimize food waste and provide more widespread access to sustainably-sourced products. 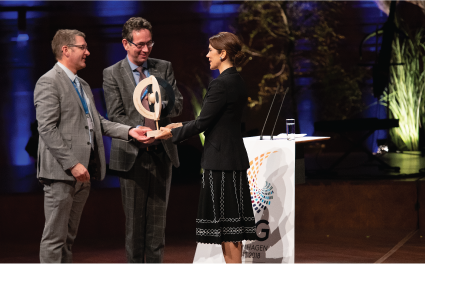 “P4G is all about building and scaling global commitments to workable solutions,” remarked Her Royal Highness the Crown Princess of Denmark as the Summit came to a close. “Our global journey is towards a sustainable economy that protects and preserves our planet and its richness. Where there is no poverty or hunger, and all human beings can fulfill their potential in dignity and equality. And where peaceful, just and inclusive societies are fostered that are free from fear and violence. P4G is a new initiative, and I hope the partnerships we celebrate here today as global examples of excellence serve as examples to accelerate our common journey.”

With the conclusion of the Summit, honored guests and participants returned to their home countries and their organizations with a clear message: the journey has only just begun. In the coming weeks and months, the 24 P4G Partnerships from the 2018 funding period will continue to develop their plans for scaling and implementation. The six scale-up partnerships among this group will use their newly awarded funding to contribute to systems change and commercial viability for green innovations in the most pressing areas of sustainable growth.

On November 30, 2018 the P4G Hub will also launch its next call for applications in order to begin to identify more innovative partnerships pursuing an inclusive, sustainable future. Learn more about P4G partnerships here. 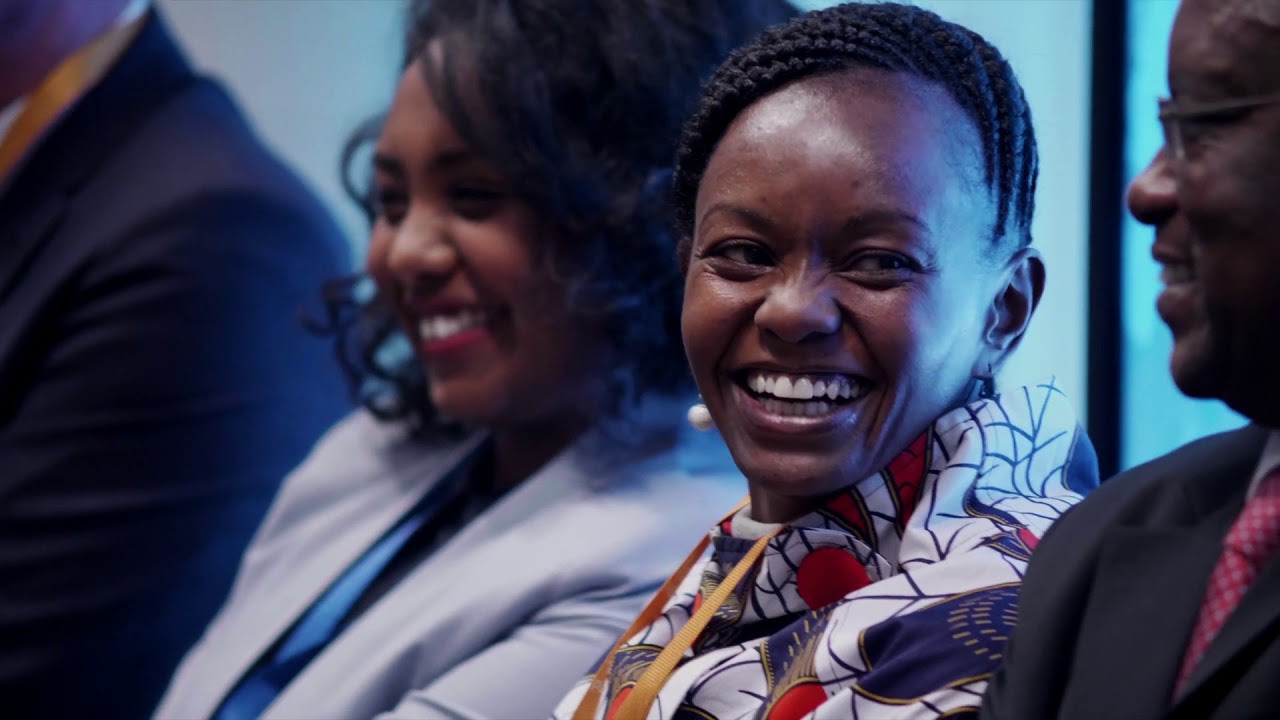