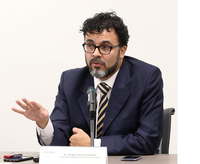 Head of the Economic Intelligence Unit, Mexico Ministry of Economy

Sergio Silva Castañeda is the appointee by the Minister of Economy, Graciela Márquez Colín, to head the Economic Intelligence Unit. This Unit, in process of creation, will absorb some of the functions that Pro México had in the areas of foreign direct investment attraction, as well as the promotion of Mexican companies and products with a focus on global value chains and micro, small and medium enterprises, in coordination with the Ministry of Foreign Affairs. Dr. Silva has a B.A. in economics by the Center for Research and Teaching in Economics (CIDE for its acronym in Spanish) and a PhD in economic history by Harvard University. He was in charge of the Mexico and Central America Program of the David Rockefeller Center for Latin American Studies, of the same university. He specializes in Comparative Latin American and Mexican History. He is an associate professor in the Mexico Autonomous Institute of Technology (ITAM for its acronym in Spanish) and he was the director of the International Relations program in the same university. In 2018 he was invited by Dr. Márquez Colín to be a part of the new government and he was part of the transition team.