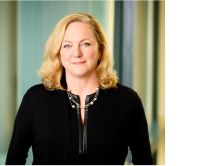 Prior to taking up this position in July 2017, Ms. Finkelston held a series of leadership positions at the World Bank Group, including IFC Vice President for Asia and Pacific and Vice President & Chief Operating Officer of Multilateral Investment Guarantee Agency (MIGA).  Ms. Finkelston spent most of her career leading IFC’s investment and advisory business in Asia. Prior to being named IFC’s first Vice President for Asia and Pacific, she was Director for East Asia and Pacific, and Country Manager for China and Mongolia. She grew IFC’s China business — investing with local entrepreneurs and banks — and led IFC’s expansion in Asia's frontier countries.

Before joining IFC, Ms. Finkelston was the Vice President at Manufacturers Hanover Trust Company in Hong Kong after starting her career in New York. As a manager at Barents Group, she led a team in Hanoi, advising and implementing Vietnam's first privatization transactions.

Ms. Finkelston has an MBA from Harvard Business School and an undergraduate degree from Dartmouth College.