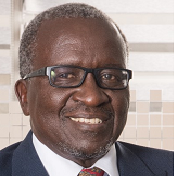 Dennis Awori has spent most of his working life in the Motor Industry across East Africa, in which he has held various positions including Sales and Marketing Manager, Branch Manager, General Manager, Managing Director and Chairman.

He was appointed the Ambassador of the Republic of Kenya to Japan and Korea from 2003 to 2009. During his tenure he assisted to open a new Embassy in Korea and built strong relations between Kenya and the two countries, especially through their private sectors, in keeping with Kenya’s new focus on economic diplomacy.

Upon his return he rejoined the private sector as Chairman of Toyota East Africa Ltd, covering Kenya, Uganda, Tanzania, Uganda, Rwanda, Burundi and Sudan, with responsibilities in both automotive and non automotive businesses. He is also a non Executive Director of several other companies including three listed ones.

In 2017 he was appointed Chairman and Country Delegate for CFAO Kenya Ltd, Director of CFAO Holdings South Africa and Director of CFAO SAS, wholly owned subsidiaries of Toyota Tsusho Corporation. The CFAO Group is in 35 countries in Africa and does business in another 19 countries through independent Dealers. CFAO operates in 4 business domains, namely Mobility; Healthcare; Fast Moving Consumer Goods and Agriculture and Technologies, Renewable Energy and Infrastructure.

Dennis has also served on the Boards of the Communications Commission of Kenya, The National Vision 2030 and the country’s New Partnership for Africa’s Development (NEPAD).

He holds a BSC degree in Aeronautical Engineering from the University of Manchester.